My second child came into the world the wrong way.

He wasn’t unplanned. He didn’t attempt to escape bum-first. He did ruin all my lovely plans to have a natural birth at a healthy point in the pregnancy with the aid of a midwife.

After being checked into the hospital for monitoring around week 30, I told the nurse I couldn’t possibly be facing a necessary C-Section. “I had a birthing plan!” I protested.

The (bad-news) nurse laughed and said, “It’s always the ones with birthing plans that end up in emergency surgery.”

But, what if she was right? What if Fate, Karma, or a teasing God wants to remind pregnant women just who’s in control of the miracle of life? Does that mean we ought not to try?

What I will suggest, to any woman expecting, is to be flexible. I went through the worst weeks ever with that second pregnancy, because every week presented a new set of bad news. First, I passed a blood clot and thought I’d killed my unborn baby. Next, I learned I had a placenta previa and would have to have a C-Section; I said, “Goodbye” to my midwife and our natural birthing class. Then, I had bleed after bleed after ambulance ride after bleed after hospital check-in after bleed after emergency delivery by a vertical C-Section.

No natural birth. And, no future vaginal births.

I’m disappointed that I couldn’t have my birthing plan. But, I’ve since given birth to three more children. And, I got to schedule every one of them. Surgery’s not ideal, but it sure is convenient for a birthing plan to arrange for babysitting.

So there, bad-news nurse. 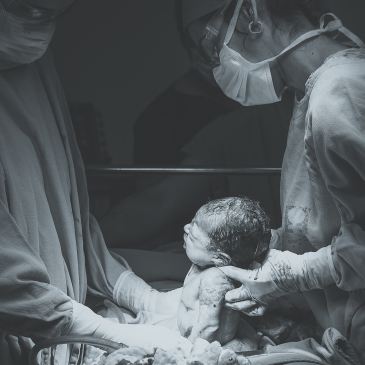 Going in for delivery of my first child was terrifying. I didn’t know what I was doing; had only vague descriptions of labor pains and ‘usual’ procedures and breathing techniques. I knew the only way I would be able to learn was by what seemed a literal trial by fire.

The second time in the stirrups, I determined, would not be so out-of-control. I was a seasoned mother, after all, and knew what to expect and what I wanted. I therefore began seeing a midwife at a birthing center. I felt this was a good step down from hospitals without going full home birth.

Problem is, my second pregnancy had a complication no one but the negligent ultrasound technician knew about …until I passed a blood clot at 28 weeks. Within a few, short days I learned all I could about placenta previas. Within the ensuing weeks I learned that I would have to deliver at a hospital. In fact, I would require a Cesarean Section.

I spent a few weeks on bed rest, which did little to stop the placenta from bleeding. I ultimately checked into the hospital full time and delivered shortly after 31 weeks.

The bad news didn’t stop there, in terms of pregnancy plans. Due to the position of the placenta’s major blood vessels, the performing surgeon opted for a classical (logitudinal) cut. I would, forevermore, require a C-Section for any children I grew.

This has led to a handful of judgmental questions in my ensuing pregnancies. No, no one else chooses how I deliver. But; yes, particularly during the rash of natural birth methods, my announcement of a schedule C-Section elicited concern.

“Did you know <insert terrible statistic> happens in <this percentage> of deliveries?”

“You’re choosing to do a C-Section? There are other options out there that <have this holistic benefit>.”

Over time, people have gotten better about comments. Or, I live around older women who are prone to more complications that often lead to surgery. Or, I’m never the glowy sort of pregnant woman and I look like I might punch someone who mentions it again.

Whatever the reason, I know the answers to the nosy questions:

Since we were planning a natural birth, I know the statistics surrounding ‘medical intervention.’

I know there are other options out there, but they’re not for me unless I want a ruptured uterus.

And I know that I may not be able to bond with my child through a beautiful water ceremony after which I eat the placenta and therefore form a permanent, circular bond with him.

Most of all, I KNOW that the most important part of delivery is getting a whole and complete child into the world with as few complications as possible. If I’ve selected the best hospital and birthing team we can afford, know what procedures to anticipate, and am willing to advocate for safely ‘holistic’ things like breastfeeding and skin-to-skin; I’ll be just fine.

And, frankly, it’s none of their damn business anyhow.

Friday, August 9: Advocated doing something with those printed words in “Books Around the House.”

I think The Mum Bum is my soul sister.

Did you know there are roughly 365 days in a year? Once every four years, that number jumps to a whole 366. Ish.

Given the number of options there, you’d think I could have spread out the births of my children.

Instead, our birthdays are all in March and April, with one aberration conveniently very close to Christmas. Add Tax Day and our wedding anniversary to the mix, and March and April are pretty much like a second Christmas season.

It’s all because of me. When I was younger I did not expect to get married. By default, I didn’t expect to have children. However; I vowed that, if I had children, I would never have their birthdays next to each other. This resolution came from the laments of peers and cousins who had to share special days. I would be a more fair mother than theirs; I would save the sanctity of days of birth.

Then I married someone in the same month we were born.

Then our first son came a little earlier than his due date and a little close to our births and anniversary.

The final straw was when my second son came nine weeks early. I figuratively threw up my hands and decided, so long as they all came into the world healthy, I would take it.

….which is why, when I was pregnant with our third, I spent all day of my birthday willing him to stay inside at least till our scheduled C-Section within the week. ‘Cause, by then, I had more realistic life goals.

Well, it’s not like we need more kids for workin’ the farm these days…

Follow I Didn't Want to Be a Mother on WordPress.com